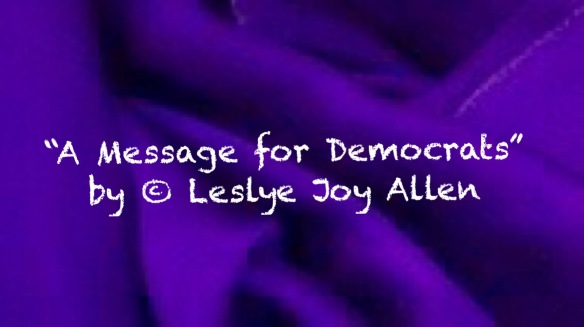 About a year ago, I was interviewed by veteran broadcast journalist Maynard Eaton. One of the things I told him was that “No one ever asks educators anything.”  The recent election of Alexandria Ocasio-Cortez, a 28-year-old Latina who unseated a veteran Congressman for New York’s 14th District DID NOT COME AS A COMPLETE SURPRISE TO ME.  Ocasio-Cortez is a newly elected Democratic Socialist and her opponent Joe Crowley, a 20-plus year veteran Congressman, out spent her campaign by a margin of 18 to 1.  Go figure. Well, here are about five of my own observations that I think Democrats need to pay attention to:

First things first.  Women are a big trend this year.  We, women are sick and tired of being talked down to, ignored, condescended to, assaulted, raped, murdered, denied equal pay, you name it. The current administration’s open hostility to women has made it abundantly clear that more women should be and are running for office and winning.  Men might start thinking about the fact that women are the majority.  Now, many women will vote against their own interests to keep the peace in their households or to hold onto a deeply flawed belief that the needs of their particular ethnic or racial group outweigh the real problems and needs of women. A lot of young women no longer have the capacity to be that self-sacrificing; and that’s a good thing. Self-sacrificing for others has never gotten women much reward, only fatigue, frustration, and maybe a few extra flowers on Mother’s Day.

Second, women (and a few men I know) are now tired of the “Pissing Contests” far too many male candidates and political pundits make of the Democratic process. I personally find that “male competitive streak” a complete turn off.  Very little productive work gets done when a group of men are trying to out talk, out preach, out pontificate, out work each other in their quest for some top position or for some form of dominance.  This kind of competition can destroy a perfectly good social movement when hyper-masculine egos worry more about what will happen to and for themselves as individuals. Many women have adapted this masculine paradigm, but it rarely works for them.  Women work best when they celebrate those things that are uniquely female and then fight against anything and anyone who works against women’s interests. I never forget that most of the so-called “established” Black male leadership and their attendant pontificators such as Jesse Jackson, Andrew Young, John Lewis, along with pundits like Earl Ofari Hutchinson, Stanley Crouch, Cornell West, and Tavis Smiley, all went out of their way to hyper-critique Barack Obama when he sought the Democratic nomination for president in 2008.  NONE of these men were Obama supporters until it became apparent that Obama would win the nomination. They were wrong over eight years ago, so I don’t trust their political instincts and I don’t like their pettiness.  Women of all races and ethnicities were Obama supporters long before a lot of men decided to join his campaign.  Right now, younger women (and by young, I mean any woman born after the Baby Boom) are successfully collaborating with each other on everything from television production to political campaigns.  All Democrats might want to take a play out of the Feminine Playbook of female teamwork if you want to get elected.

Third, the Democratic Party is still currently dominated by aging men and women that young candidates and young voters see as part of a corrupt system.  Some of these Democratic politicians are now in their late sixties or well into their seventies and they haven’t had a new idea in two decades.  However, Bernie Sanders was an older white man that reached young America, the Millennials. Young Democratic Millennial America wanted Sanders as their Democratic candidate.  My own “play niece” CeAvani who graduated Maynard Jackson High School here in Atlanta in 2017 told me that ALL of the students at her high school were “Feeling the Bern.” Democrats, hell bent on focusing on Hillary Clinton, never bothered to find out what portion of Sanders’ message and platform resonated so well with young voters and those who would soon be registered voters.

Fourth, every teacher, college instructor, and college professor you know could have told you that there were Bernie Sanders loyalists sitting in their classrooms.  One of my former students told me point blank that there were elements of Socialism in Sanders’ message.  There’s that terrifying word: Socialism.   Yet, she said, that is exactly what drew her to him. Now, none of these young people are talking about Cold War Era Soviet-style Socialism where the government owns and controls everything. Yet, they do think certain protections (like having healthcare and not drowning in Student Loan Debt) ought to be things that they shouldn’t have to constantly worry about. It is no accident that newly elected Congresswoman Alexandria Ocasio-Cortez is defined as a Democratic Socialist.  I met and meet young Democratic Socialists with a variety of ideas almost every day. Yet, you can’t find any career Democratic politicians willing to examine this particular pulse in the youngest voting population in this country.  (And here’s another sidebar to remember: It wasn’t Democratic or Republican members of Congress that put the National Rifle Association on notice; it was a group of high school students, led by 18-year-old Emma González, who formed the March For Our Lives Movement because they are weary of seeing their classmates shot to death because some crazy guy could easily purchase an assault rifle. They are currently going around the country registering people to vote.)

Finally, young people, and young women in particular, are about to reshape American politics in ways no Democrat over the age of 50 has ever seen. These young people do not engage in Twitter wars of words (a waste of time, if there ever was one).  They don’t respond to or post every ridiculous comment our current president says.  They are back on the streets.  They are knocking on doors. They are going to places of business and schools and talking to people face-to-face instead of doing what lazy ass politicians do: namely, annoying everybody with robocalls. They are doing things not always covered by the news media. They have also discovered and perfected methods of campaigning where they don’t need as much money to get elected as the long term Congress People they intend to replace; and not a single current member of Congress can tell you how these young people are accomplishing any of this.  So Democrats, if you want to regain some political momentum, you need to stop acting like young people have nothing to tell you. They do.  You also need to stop thinking that the only way you should leave public office is in a coffin or an urn.  For God’s sake, please retire with some grace; and remember our young people are not supposed to think just like you and I.  If you care anything at all about them and about our future, you might consider that they are the future. They will outlive and out last us all.  They will turn the tide.